6 Financial Moves to Make Now for a Amicable Divorce 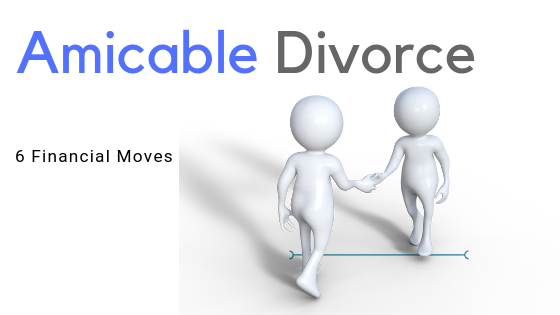 Financial management in marriage separation is not for the faint-hearted. In fact, going into a divorce can feel similar to heading into war: you must expect the unexpected. You put up your defenses and feel like you are headed for a huge battle with your spouse. Not to mention, you feel like you’re going to get hurt or scarred in some way. But it doesn't have to be that way.

Creating an amicable split with your former marriage partner can be an emotionally and mentally exhausting process. But, there are many benefits to an amicable division of finances for both your health and your bank account - not to mention whatever remains of your relationship.

The more peaceful you and your soon-to-be-ex can manage your split, the better off you'll both be.

Benefits of an Amicable Divorce

When emotions are sky high during a divorce, it can be easy to let things get nasty. Dredging up past mistakes and betrayals or pointing out personality flaws can be a tempting choice. But, it is so much easier for everyone involved when spouses can be civil and yes, even kind to one another.

Some of the benefits of an amicable divorce include:

Better for your Children

The impact of divorce on children have been proven to diminish academic performance, social relations, and psychological adjustments.

It is not healthy for children to hear their parents arguing or berating one another. Parents who disparage their child’s parent in front of their children can also leave devastating scars on a child's psyche.

When two partners choose to have an amicable divorce, they establish better communication from the start, and spare their children emotional devastation and psychological repercussions.

By having an amicable split and having responsible financial management in marriage separation, couples will be able to save themselves unruly lawyers fees and years worth of court dates.

Whether one wants to stay together and the other is leaving or both partners are unhappy and ready to call it quits, divorce is an emotionally exhausting process. By choosing the amicable route, both partners cut down on stress, anxiety, and emotionally devastating months of fighting.

Having a civil divorce also gives more privacy to the separating couple. Contested divorces often means that other people, such as friends, family, and legal professionals, may become involved in the proceedings. This puts both spouse's personal lives on display.

Here are 6 pieces of divorce advice to follow in order to have an amicable division of finances that won't break your bank.

Part of financial management in marriage separation involves both partners gathering important papers. These should include pay stubs, tax returns, loan and investment statements, and receipts and bills related to family expenses. Account numbers for bank accounts, investments, insurance and credit cards should also be collected.

It's natural for couples to rack up debt during their marriage. Purchasing a family home, vehicles, vacations and other goodies add up throughout a relationship.Couples are wise to make a list of their debts before pursuing a divorce. Such debts may include personal loans, mortgage, car or student loans, or a line of credit. Couples should separate the debts based on what was accumulated as marriage debt and what they owe individually.

Joint and separate assets should also be listed such as shared bank accounts, the marital home, investments, insurance policies, RRSPs, pensions and more. Couples should then decide how to divide property and assets. They may want to add up how much all of the assets are worth and then separate it as they see fit.

One important piece of divorce advice is for couples to close joint bank accounts as soon as they decide to separate. Money within the account should be separated accordingly. This is important, since both parties will still have access to shared money so long as the account is open and will be legally responsible for any debts that accumulate within the account.

However, in mediation, it is often times recommended that spouses keep the status quo of all joint accounts in place pending the resolution of their divorce, given how time efficient a mediated divorce can be.

A financial advisor specializing in divorce can help both spouses make sense of their finances during their separation. They can help both get organized, establish new credit, deal with shared bank accounts, and help create a post-divorce settlement budget.

5. Decide What is Fair

It goes without saying that the spouse who has primary custody of the children should be entitled to child support. Issues of spousal support should also be discussed in a way that is fair and respectable. Debts incurred before entering the marriage should leave with the individual who racked them up. Shared debts should be paid off equally.

Couples should also decide what to do with the family home, either selling it and splitting the profits or allowing the parent who keeps the children most often to stay in the home.  Couples with several issues to resolve financially benefit from working with a mediator who can help them make educated decisions around equitable distribution.

6. Get it in Writing

One divorce advice tip exes should learn quickly is this: If it isn't in writing, it isn't legal. If both spouses agree to have an amicable split with a fair division of assets and debts, it's still important that both partners get the agreement in writing. They may even choose, wisely, to have the agreement signed in front of a lawyer or in front of two witnesses who also sign the paper.

This will ensure that neither spouse can go back on the agreement.

Splitting up with your spouse after years of marriage is tough. Make the process easier for your wallet, children, and yourself by choosing to end things peacefully with your ex. Decide fairly on how you will split your finances during your divorce and act responsibly regarding your financial management in marriage separation.

How to Adjust to a Single Income After Divorce